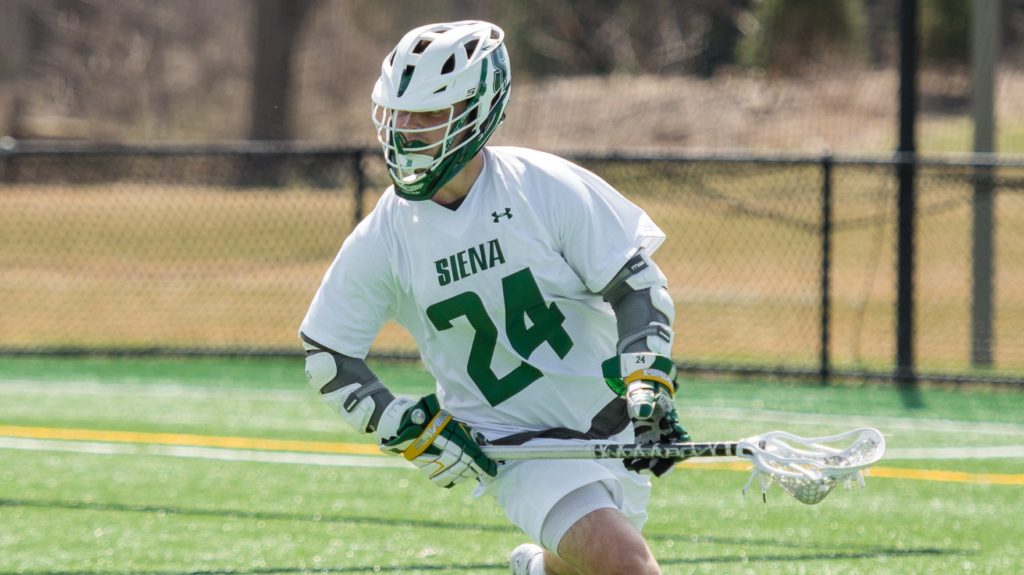 Jack Kiernan was an absolute force in Siena‘s season opener this weekend.

The Leading Edge 2017 alumnus by way of Ridgewood was instrumental in the Saints’ 14-12 victory as he set up four goals and tallied one as well to help withstand a furious LIU comeback. He also picked up three ground balls and caused a pair of turnovers.

Kiernan is Siena’s leading returning scorer after posting 29 goals and seven assists a season ago.

’17 Toby Burgdorf (Westfield) was a brick wall in the Friars’ cage with 13 saves while also picking up four ground balls as Providence nipped the Crusaders. ’16 Sean Leahey (Seton Hall Prep) tossed out an assist in the win. ’18 Chris Conlin (Chatham) helped keep Holy Cross in the game with an insane seven-caused turnover effort to go with four ground balls.

’18 Cole Kirst (Seton Hall Prep) dished out an assist to go with a ground ball, ’16 Austin Pierce (Chatham) buried a goal and ‘18 Pat McIlroy (Westfield) caused a turnover on the back end for the Mountain Hawks.

’19 Chris Kirschner (Immaculata) put together his first career multi-goal game with a pair of goals and a ground ball to help the Golden Eagles nip Bellarmine.

’16 Kevin Quigley (Ridge) pocketed a goal and a ground ball to lead the Blue Devils to their first win of the year.

’17 Owen McElroy (Avon Old Farms) got the start and tossed aside three shots to secure the win for the Hoyas. ’17 Andrew Robbins (Ramapo) had one of the Leopards’ goals, while ’18 Ryan Kirkwood (St. Peter’s Prep) had two ground balls for Lafayette.

’17 Jack Anderson (Mendham) picked up a pair of ground balls in the Hawks’ win.

’15 Connor Kirst (Delbarton/Lawrenceville) set up a pair of goals to go with two ground balls, ’17 Corey McManus (Summit) scored once and ’18 Will Vitton (Summit) denied a dozen shots in the Wildcats’ loss.

’18 Luke Hunziker (Westfield) caused a turnover and picked up a ground ball for the Raiders.