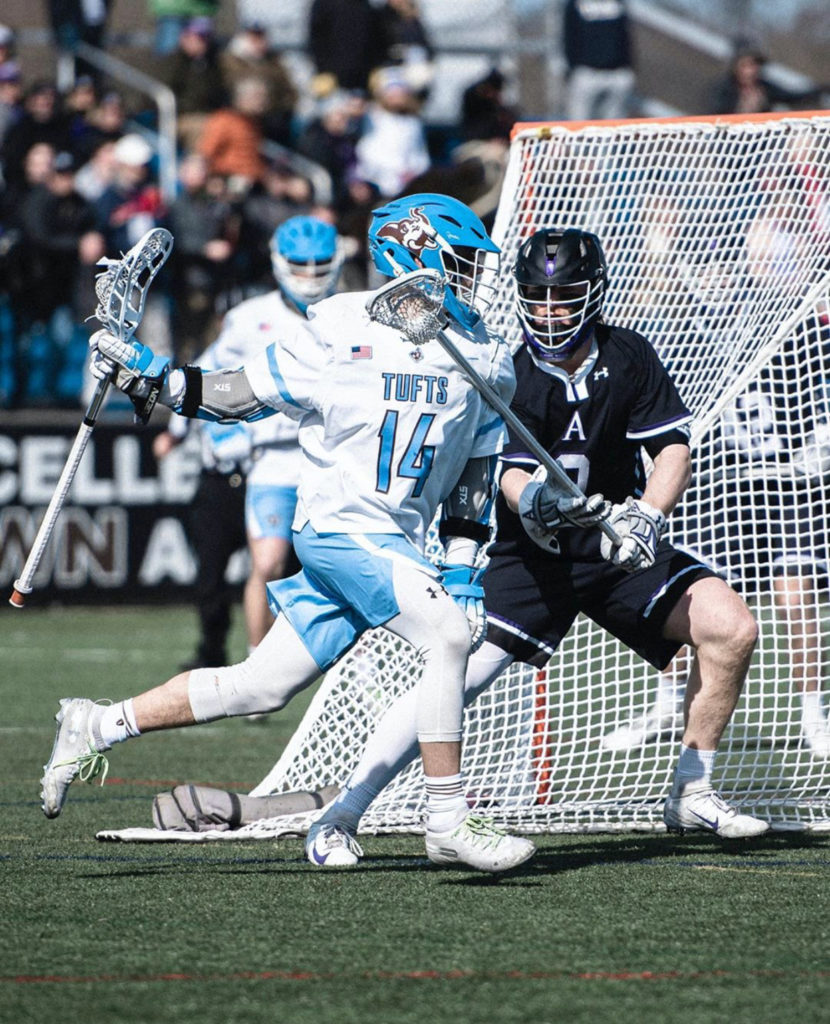 It would appear that Tufts is very much on board with the, ‘score a whole lot of goals,’ strategy in every single game.

Leading Edge 2018 alum Mac Bredahl (Chatham) was at the heart of a pair of Jumbo routs, dished out four assists to go with a hat trick, two ground balls and a caused turnover as Tufts hammered NESCAC rival Amherst, 25-15.

Earlier in the week, Bredahl beat up Springfield with three goals and five assists, plus a pair of ground balls, in a 25-6 win. The two-sport athlete, who also golfs for the Jumbos, has 21 points in three games.

’18 defenseman John Farrell (Seton Hall Prep) fired home his first career goal to go with a caused turnover and a goal as Bates rolled over Keene State. Farrell tacked on a ground ball against Trinity.

’17 Alex Choy (Ridge) had a ground ball in the blowout over Utica and followed it up with a caused turnover to help Hamilton to a perfect week.

The Cavaliers fell despite a strong 14-save, one-ground ball day from ’16 Matt Nestler (Chatham) and a caused turnover and a ground ball from ’16 Kyle Myers (Johnson).

’16 George Grell (St. Peter’s Prep) tucked home a goal as the Bears nipped the defending national champions, despite a caused turnover and a pair of ground balls from ’17 Kyle Kology (Chatham).

’18 Will Vitton (Summit) was great in the Wildcats’ cage in the upset of the Quakers, stuffing 14 attempts to go with two ground balls and a caused turnover. ’15 Connor Kirst (Delbarton/Lawrenceville) added a hat trick and three ground balls and ’17 Corey McManus (Summit) tacked on a goal. ’16 Drew Robshaw (Mendham) had a ground ball for the Quakers.

McManus had two goals against the Dragons, while Vitton made eight saves and had a pair of ground balls. Kirst chipped in a goal and a ground ball, but it was ’17 Sean Quinn (Seton Hall Prep) who caused a pair of turnovers to go with a ground ball to help the Dragons secure the win. Quinn was amazing in the loss to the Hawks, smashing away four turnovers and scooping up an incredible eight ground balls.

Robshaw helped Penn get a split with a goal and an assist against the Hawks.  ’17 Jack Anderson (Mendham) had four ground balls and a caused turnover in Saint Joseph’s win and tacked on a ground ball against the Quakers.

’16 Kevin Quigley (Ridge) helped the Blue Devils to their third straight win with a pair of assists.

Copy and paste from every other week, because ’17 Toby Burgdorf (Westfield) was a brick wall for the Friars, stopping 16 shots and picking up a ground ball as Providence moved to 5-1. ’16 Sean Leahey (Seton Hall Prep) put together a two-goal, two-assist, five-ground ball, two-caused turnover day in the win.

’17 Brian Tevlin (Seton Hall Prep) tossed out a pair of assists to go with two ground balls in Yale’s win.

’17 Owen McElroy (Avon Old Farms) was strong yet again in the Hoyas’ cage, tossing aside nine shots and securing three ground balls as the Hoyas rolled.

’18 Ryan Decker (Chatham) picked up an assist and five ground balls for the Raiders.

’17 Zach Masessa (Montgomery) caused a pair of turnovers and had a hand in four ground balls for the Scarlet Knights.

’19 Chris Kirschner (Immaculata) had a goal, two assists and a ground ball for Marquette.

’19 Mike LaPoint (Manasquan) came on late in the game and made his first career save for the Spartans by denying the lone shot sent his way.