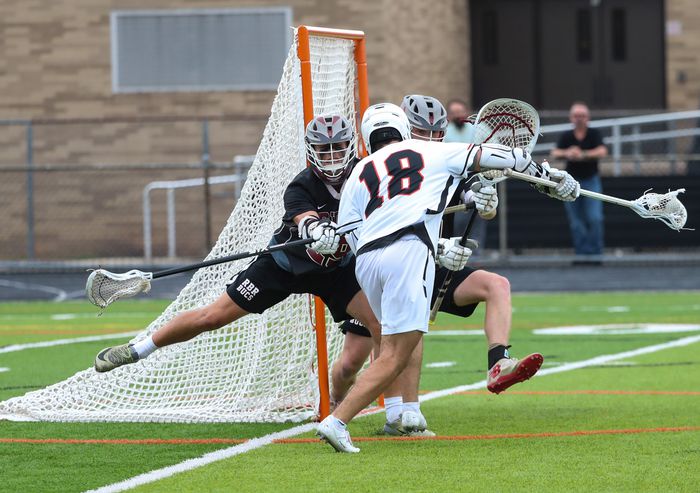 Leading Edge 2024 Michael Perrino had four goals and an assist to lead Somerville to a playoff win. Photo courtesy of NJ.com’s Andrew Mills.

Michael Perrino picked a fine time for the best game of his young Somerville career.

The Leading Edge 2024 attackman scored his first two career goals Tuesday. Thursday, he doubled up, scoring four goals and setting up another as Somerville came roaring back from an early deficit to down Red Bank Regional, 11-8, in the South Jersey Group 2 quarterfinals.

’23 Lorenzo Varona supplied two goals and an assist for the victors, who move on to play Wall on Saturday.

’21 Logan Peters (Rutgers) scorched Robbinsville for four goals and three assists to give him 130 points on the season. ’23 John McCurry tallied four times in the win, ’22 Matt Dollive (Army) had two goals and two assists and ’23 Connor Moore dished out an assist and scored once.

’23 Carson Cooke netted a hat trick to go with an assist and two ground balls as Shore fended off Haddonfield. ’23 Walker Hunter stopped nine shots for the win.

’22 Mikey Kloepfer (Merrimack) erupted for four goals, four ground balls and two assists and ’22 Chase Alber paired two goals with an assist to go along with a ground ball as SPF rolled past Princeton.

’22 Will Doran set up four goals and added two of his own to eclipse the 90-point plateau for the season.

’22 David Link (Villanova) dished out a pair of assists to go with a goal as the Green Wave cruised.

’24 David Brothers snapped home a hat trick to go with an assist and ’24 Trevor Sardis won all three of his faceoffs to fuel Bernards’ rout.

’23 Nick Catino did what he could for Del Val, stopping 17 shots, and ’23 Jack Bill tallied once.