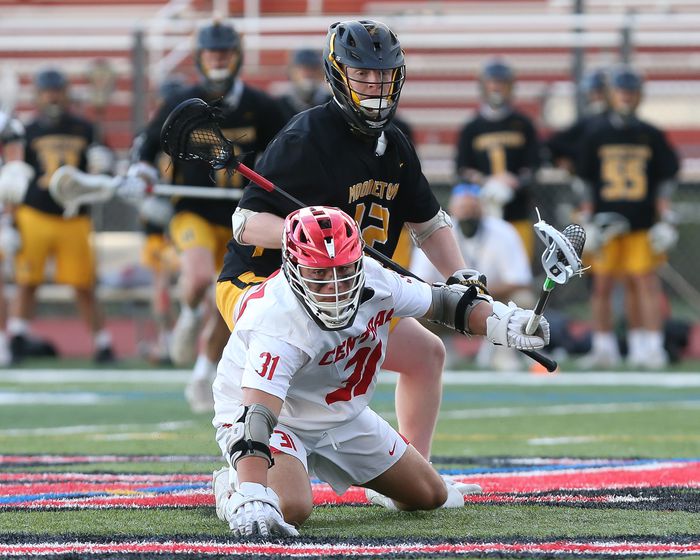 Sean Creter started his varsity career by going 100 percent at the X, scoring two goals and ripping a net with a shot. Decent start. Photo courtesy of NJ.com.

Sean Creter made sure to leave a great impression in his first varsity action for Hunterdon Central.

The Leading Edge 2023 standout faceoff midfielder, recently ranked No. 36 in the country in the ’23 class by NLFRankings.com, winning all 13 faceoffs he took and scoring twice to lead the Red Devils to an 11-6 win over Moorestown to kick off the 2021 season.

One of Creter’s goals was shot so hard that it put a hole in the net, punctuating his outstanding debut for HC.

’22 Christian Bockelmann (Yale) was a force for the Bulldogs, pairing a hat trick with two assists to pave the way for an RFH win. ’23 Matthew Bockelmann also tallied once.

’21 Griffin Kology (Richmond) was a machine off the carpet, scooping up seven ground balls. ’22 Marcus Colaco tallied once for Chatham.

’22 Cade Schuckman popped off for a hat trick and four ground balls to pace the Lakers. Mountain Lakes also got an assist and two ground balls from ’22 LSM Ryan McLaughlin (Penn) en route to their win.

Westfield got a goal from ’22 James Haley.