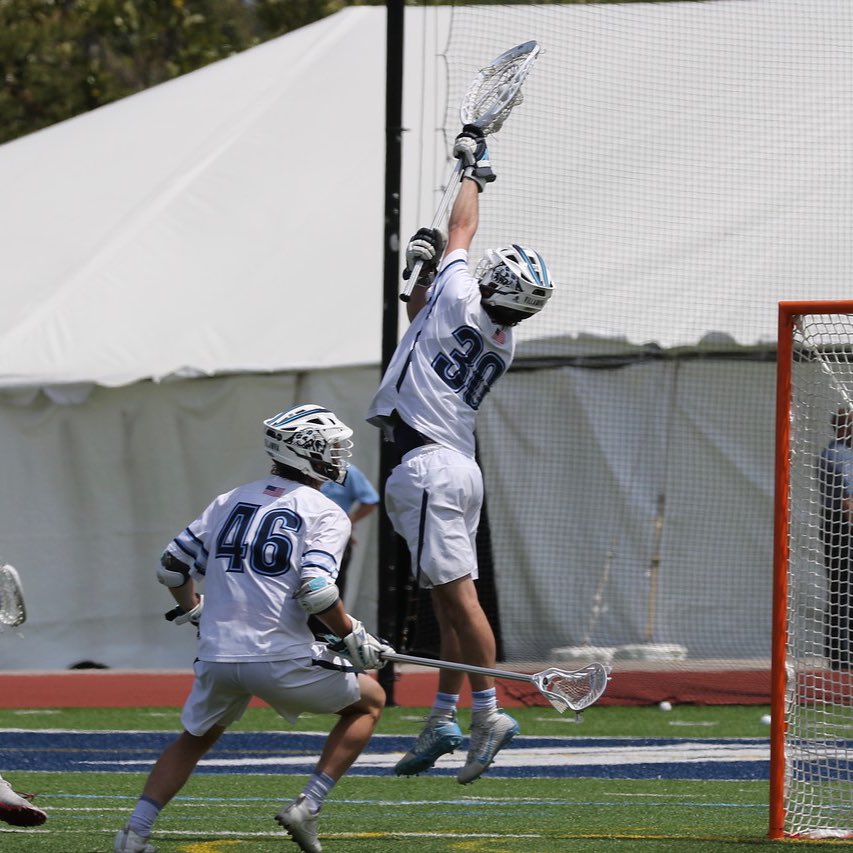 Will Vitton made sure that Lehigh didn’t end its regular season with a goose egg in the loss column.

The Leading Edge 2018 alumnus by way of Summit made nine saves to lead Villanova to a stunning 16-8 rout of the previously unbeaten Mountain Hawks on Saturday.

The game marked Vitton’s sixth game of nine or more saves this year. Fellow Summit alum ’17 Corey McManus helped out at the other end with a hat trick. Villanova plays Georgetown in this week’s Big East tournament.

How about the games from Griffin Westlin and Quinn McCahon today!? Both had 5 points off 3G and 2A in incredible performances.#GoIrish☘️ pic.twitter.com/uTEWo5jgOC

’18 Griffin Westlin (Seton Hall Prep) was the catalyst of the Irish’s offensive explosion. Westlin netted a hat trick, set up two more goals, grabbed three ground balls and caused a turnover for Notre Dame, which swept the Orange this year.

’19 Brandon Hund (Johnson) dished out an assist and added a ground ball for the Tigers.

’17 defenseman Jared Reinson (Montgomery) was a force all over the field for the Blue Jays, setting up a goal, causing two turnovers and grabbing three ground balls as Hopkins won its Big Ten quarterfinal game.

’20 Kyle Stephenson (Seton Hall Prep) snapped up a ground ball for the Wolverines, who stunned the Buckeyes in the Big Ten quarterfinal.

’17 Jack Kiernan (Ridgewood) nearly singlehandedly willed the Saints to an upset in the MAAC quarterfinals. He went off for five goals, two assists, six ground balls and a caused turnover for Siena.

’16 Matt Stagnitta (Montgomery) dished out two assists and added a ground ball for the Dolphins.

’19 Jack Fabean (Manasquan) snatched up a ground ball for the Spiders.

’20 Mike Ricciardi (Mendham) buried his first goal for the Gulls.

’17 Jason Coyle (St. Peter’s Prep) caused a pair of turnovers in the Widener game and followed it up with a ground ball in the rout of Lycoming.