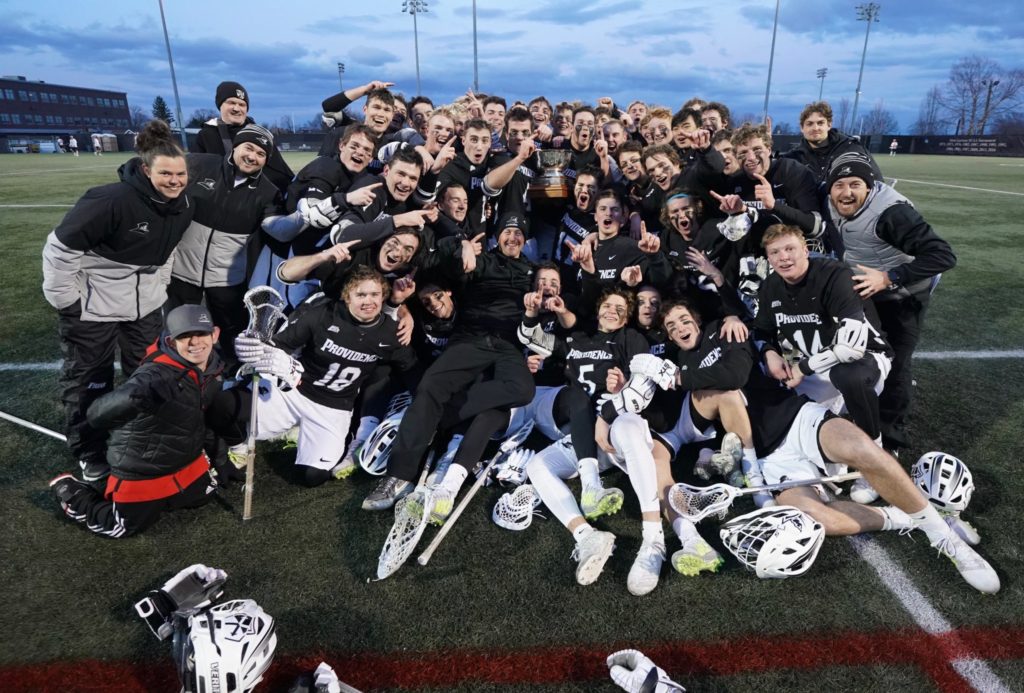 The Sean Leahey goal and ensuing team celebration that brought the Ocean State Cup back to Friartown for the 2nd time in the past 3 seasons! 🌊🏆💪 #GoFriars #PCWayEveryday #FRIARTOWN #StateChamps

Sean Leahey picked the perfect time to cap off his hat trick for Providence.

The Leading Edge 2016 product by way of Seton Hall Prep ripped a bouncer from top center that found the back of the net to give the Friars a 13-12 win over Brown to claim the Ocean State Cup. Leahey also had a pair of ground balls for Providence, which improved to 4-1.

’17 Toby Burgdorf (Westfield) continued his strong play in the Friars’ cage with 16 saves. ’17 George Grell (St. Peter’s Prep) paced the Bears with two helpers, a goal and a ground ball.

’17 Sean Quinn (Seton Hall Prep) did it all for the Dragons in their mauling of Robert Morris, causing five turnovers, grabbing five ground balls and even setting up a pair of goals. He also added a caused turnover in Drexel’s second win of the week, which the Dragons won despite a hat trick and an assist from ’19 Chris Kirschner (Immaculata).

’17 Jack Kiernan (Ridgewood) racked up his second hat trick in a row with three goals to go along with two goals and two ground balls to get the Saints back in the win column.

’18 Cole Kirst (Seton Hall Prep) bagged a pair of goals and added a ground ball to fuel the Mountain Hawks’ rout in their Patriot League opener. ’18 Pat McIlroy (Westfield) chipped in a ground ball in the win.

’17 Zach Masessa (Montgomery) grabbed three ground balls and set up a goal for the Scarlet Knights.

’16 Drew Robshaw (Mendham) hammered home a pair of goals for the Quakers.

’17 Jack Anderson (Mendham) picked up a pair of ground balls and caused a turnover for Saint Joseph’s.

’17 Andrew Robbins (Ramapo) supplied half of the Leopards’ offense with a pair of goals, while ’18 Ryan Kirkwood (St. Peter’s Prep) racked up four ground balls and a caused turnover.

’18 Mac Bredahl (Chatham) tossed out four assists to go with a goal, two ground balls and a caused turnover as the Jumbos rolled in their season opener.

’19 Thomas Ehret (Lawrenceville) snapped home his first career goal to pace the Mammoths to their second win of the weekend.

’16 Matt Auletti (Ridge) ripped home a goal for the Eagles.

’18 John Farrell (Seton Hall Prep) picked up a ground ball against Babson and followed it up with two ground balls and a caused turnover.